East Iceland is one of the least traveled regions in the country. It’s sense of remoteness only adds to the picturesque landscapes and mystical folktales that the area is famous for. In this article, you’ll read about the major natural attractions and tour routes, with the ultimate list of the most-visit places in East Iceland.

East Iceland is a vast region so it’s best to divide iot into smaller regions:

We wrote a separate article where we share practical travel information about East Iceland, including important things to know about its infrastructure, weather and history.

Although it’s more on the South Coast than in the East, a large part of the Vatnajokull area (from Skaftafell to Hofn and the coastline under Vatnajokull glacier) officially belongs to East Iceland.

Vatnajökull National Park became a UNESCO World Heritage site in 2019. The entire park covers 14% of Iceland and there are plans to extend its borders to cover the entire Icelandic Highlands. This would make it one of the largest national parks in the world, covering 30% of the country.

Vatnajökull glacier measures 8100 km2 (3127.4 sq. mi.). It’s the largest ice cap not on the Earth’s poles with a total area that is three times bigger than Luxembourg. Underneath this mass of ice hides the tallest mountain in Iceland, Hvannadalshnúkur, which rises 2110 m (6922.5 ft.) into the sky. There are additional mountain peaks as well as active volcanoes, craggy valleys, crevasses, and subterranean lakes.

If the glacier weren’t large enough on its own, Vatnajökull is the source of more than 30 outlet glaciers. A large number of these outlet glaciers can be seen from the car when driving along Road 1. Among all of the natural wonders that this region in particular has to offer, you can expect to see thundering rivers, glistening glacial lagoons, cascading waterfalls, and a large number of ice caves.

Glacier lagoons form at the point where a glacier tongue reaches the lowland. As the glacier melts and retreats, the water fills up the depression that was left behind, creating a lake. At the point where the ice reaches the water, large pieces of ice break away from the glacier and end up floating in the lake, creating a surreal sight. Jökulsárlón Glacier Lagoon is certainly one of Iceland’s most popular destinations along with Fjallsárlón, another glacier lagoon that is just a 10-minute drive away.

Another major attraction in the area is Skaftafell. This was once a sovereign national park, but it was later combined with Vatnajökul National Park. Skaftafell is a beloved destination for hikers and the area is filled with well-constructed hiking trails. Walking routes of varying difficulties and lengths allow visitors to reach beautiful viewpoints over the glacier and explore lush birch forests and barren glacial river valleys.

Outlet glaciers from Vatnajokull provide amazing playgrounds for adventurers. Guided glacier hikes, ice caving, and ice climbing tours are offered on various glacier tongues in the area throughout the year. Most of them depart from Skaftafell, but there are glacier tours with pickups in Hofn, too. Learn more about Iceland’s glaciers in this article.

The Eastfjords area stretches along the coastline from Berufjörður in the south to Borgarfjörður Eystri in the north. The area is characterized by dramatic shorelines, narrow fjords, and steep valleys where tiny fishing villages sit surrounded by breathtaking scenery.

The names of the fjords and villages all have the same ending, “fjörður,” meaning fjord. Examples of this include Seyðisfjörður, Fáskrúðsfjörður, and Borgarfjörður. The villages offer a rich culture full of art and music.

In the summer, they become a creative hub for artists and musicians, with a steady increase in the number of art festivals offered in recent years. The painter Jóhannes Sveinsson Kjarval, one of the most famous artists in Iceland, was raised in Borgarfjörður Eystri. This town is now home to a museum celebrating his life, which is also the location where he created a number of his most famous pieces.

Many of these charming locations have been featured in advertisements, movies, and TV shows. Their stark beauty and remote locations have been perfect in productions like The Secret Life of Walter Mitty, the Icelandic crime series Trapped, and Stardust.

Lagarfljót is the name of East Iceland’s largest lake. It’s located further away from the coasts, towards the inland area. Measuring 5 km (16 mi.) in length, 2.5 km (1.6 mi.) in width, and reaching 112 m (367 ft.) at its deepest, Lagarfljot is one of the largest lakes in Iceland.

According to the local legends, a cryptid serpent named Lagarfljótsormurinn lives in the depths of the lake. In 2012, someone even caught it on a camera and shared the video on YouTube. The footage went viral.

Sightings of the Lagarfjlót serpent have been recorded since 1345. The creature has been described as a snake, a dragon, a giant worm, and a giant seal. There are constantly new photos and videos coming out, showing strange appearances on the surface of the lake. While many of these apparitions claim to be a venom-spitting monster, most have shown to be logs, currents, ice, or wind. Some have left the experts without explanations, though, and no one knows what could have caused these disruptions. Could it really be the serpent?

If you visit East Iceland, you’ll definitely see Lagarfljót since it’s right next to Egilsstaðir, the capital of the East. With a population of about 2500 people, this by far the largest town in a region and serves as a commerce center. Many of the places that offer accommodation here can be found along the picturesque shores of the lake. If you don’t feel like driving, daily flights are offered from Reykjavík to Egilsstaðir.

Iceland’s largest forest, Hallormsstaðaskógur, also sits on the shores of this lake. The forest covers an area of 740 km2 (286 sq. mi.) and contains at least 80 different species of trees brought to the country from 177 locations overseas.

Another major sight in the area is the 128-meter (420-ft) high Hengifoss waterfall, which is one of the most famous landmarks in all of East Iceland. The waterfall is particularly picturesque with the distinctive layers of red lava strata visible in the cliffs around the waterfall.

The interior of the country is called the Icelandic Highlands. This uninhabited tundra wilderness covers the majority of Iceland and is home for some of the most impressive – and most inaccessible – natural attractions. The eastern part of the Highlands boasts some of the most famous volcanoes and mountains of Iceland: Askja, Snaefell, and Herdubreid.

Within the Dyngufjöll mountains lies Askja, a caldera that measures 50 km3 (31 cu. mi.). Askja was formed in a major ash eruption at the end of the Ice Age. This famous caldera is home to a few volcanoes and craters. Learn more about Iceland’s volcanoes here.

The most famous of these is Víti, whose name means “Hell.” This explosive volcanic crater is now filled with water that remains at around 30°C (86ºF). The caldera is surrounded by absolutely unearthly terrain, moon-like landscapes, and barren volcanic desert. No wonder it’s so popular with hikers.

Herdubreid is not far from Askja, located in the middle of Iceland’s largest lava field, Odadahraun. With a height of 1682 m (5518 ft.), the table mountain also goes by the name of the “queen of Icelandic mountains.” In a 2002 poll, Herdubreid won the right to be called the national mountain of Iceland. Historically, societal outcasts, shunned because of the crimes they had committed, would gather at the oasis the foot of this mountain.

Snæfell, the “Snow Mountain,” towers at 1833 m (6013 ft.) above sea level. If you exclude the peaks in the glaciated areas, this is the tallest mountain in the country. The plains and fellow mountains near Snæfell in the Eastern Highlands are famous for their role as a grazing ground for reindeer.

Meet Reindeers On the Way

Iceland’s reindeer population was first brought over from Norway in the 18th century. While the initial idea was to farm them, this never happened. The result is that there are now wild reindeer roaming freely around East Iceland, heading up to the Highlands in the summer as the weather gets warmer. 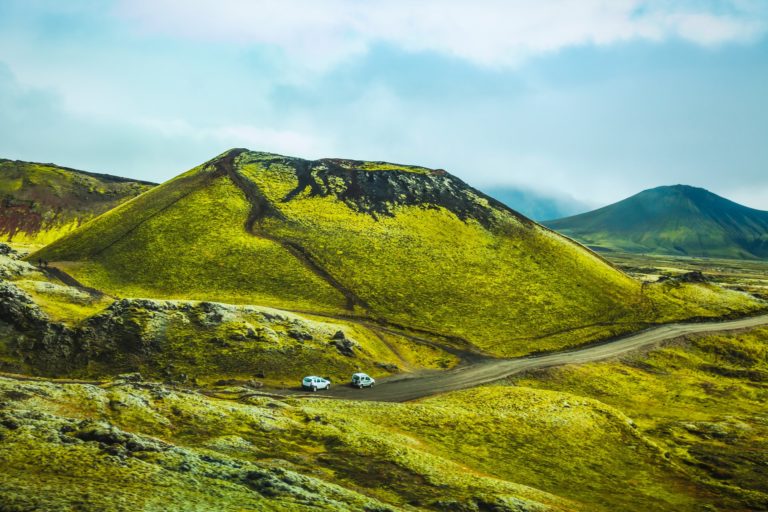 The Highlands of Iceland – Travel Information

The Highlands of Iceland is a tundra wilderness covering 40,000 km2 (15,444 sq. mi.) of the uninhabited interior of the country. It’s one of Europe’s 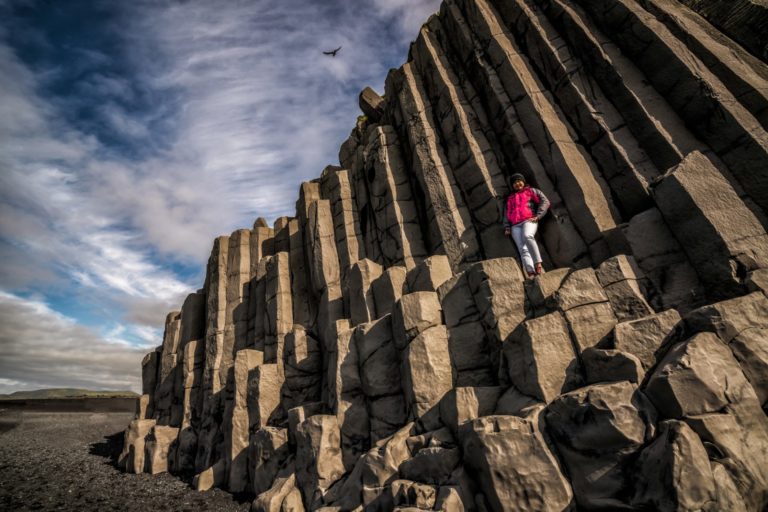 Iceland’s southern area includes two of the country’s most famous tourist routes: the South Coast and the Ring Road as well as the most beloved 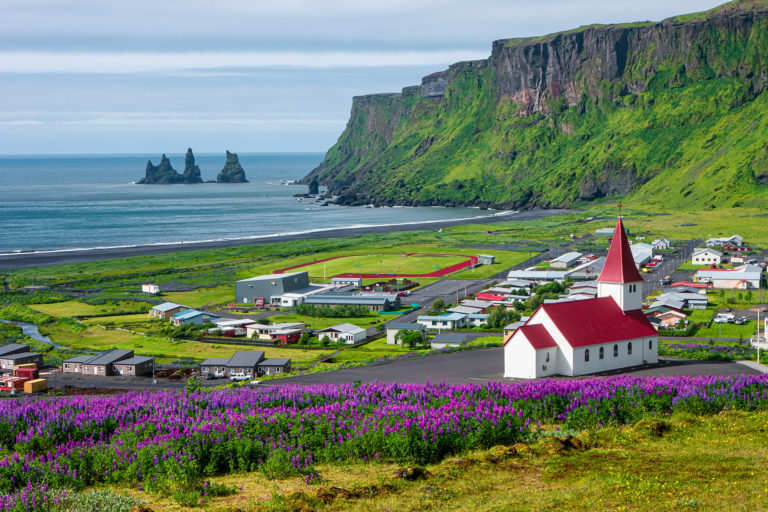 Nowhere else in the world can you find so many outstanding natural attractions located so close to the capital as in South Iceland. The sights